Singular to plural in Italian

Singular to plural in Italian 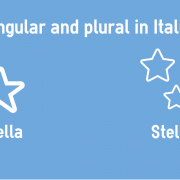 How to form the Italian plural

The Italian plural is formed by changing the final vowel of each word according to these general rules:

Vowel changes in the Italian plural

We can highlight the following main categories of words according to their final vowel:

Nouns ending in -a

Masculine nouns ending in -a will form their plural with -i, feminine nouns change their ending from -a to -e.

In case -a is preceded by c or g, an h is added just before the new vowel -e.

A noun ending in -e changes its vowel to -i, regardless of its gender.

This kind of nouns derives from foreign or ancient languages; the vowel ending remains unchanged when forming the plural.

These nouns are identical in their singular and plural forms, and, therefore, the article is the only thing that distinguishes them.

These nouns are almost always masculine, thus normally change to -i when forming the plural.

When -o is preceded by c or g and the stress falls on the next-to-last syllable, an h has to be added between the consonant and the new vowel.

Nouns ending in -io simply drop the -o when forming their plural.

If the i preceding -o is stressed, then it is necessary to add another i:

All the nouns in the table switched their gender according to number: they are masculine when singular, but their plural forms are feminine.

Irregular plurals may also involve completely different endings from their original form, as shown in the following examples:

Invariable nouns keep the same form in both singular and plural.

Nouns ending with an accented vowel

If the last letter is accented, singular and plural will be the same.

Nouns with one sillabe don't change in their plural form.

If a noun is shortnened, the plural form is the same as the singular.

Words from other languages don't change in the plural.

Defective nouns don't have singular or plural.
They are mostly abstract nouns used only in singular, or nouns of collective elements only used in plural.

When an object consists of two pieces, it is common to refer to it as paio (a pair).

Most of the nouns in Italian are individual. This means they indicate only one element when grammatically singular.

Nevertheless, there are nouns that are collective: they indicate more than one element or a group when grammatically singular.

Although they exist both in singular and plural, some nouns can be both collective or individual depending on the context.

The distinction between countable and uncountable nouns in Italian is the same as in English.
Since uncountables can't be counted, they don't have a plural, and to express the plural quantity we have to resort to other expressions:

Overabundant nouns (more than one singular or plural form)

Overabundant nouns have more than one form for the plural and/or for the singular.
The meaning of the two terms is often related, but changes according to gender and number.

Exercise on plural nouns formation - Fill in the blanks