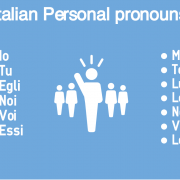 In Italian, there are 4 categories of personal pronouns.

In this chapter we are going to discuss all of the 4 categories.

Which are the personal pronouns in Italian?

We use personal pronouns (pronomi personali) to replace persons, animals, things or ideas.

The third person pronouns (Egli, Esso, Ella, Essa, Essi, Esse) could still appear in some texts but they have been replaced in speech and writing by more colloquial forms, Lui, Lei, Loro.

Tu vs Lei (form of politeness)

The form Lei is a form of politeness.
It's used in a formal context and when addressing somebody you don't know well, older or in a higher position than you.
Remember to write it with a capital letter, not to confuse it with third singular person lei (she).

To distinguish it from Tu, pay attention to the main verb.

To understand the difference between these two kinds of pronouns, it's necessary to analize the sentence and context.

These pronouns are used to replace an indirect object (whom? to what? for what?).

They are called stressed because the accent of the sentence falls on them.

Stressed pronouns don't need to be merged with the main verb, unlike unstressed pronouns.
They usually come after the verb and are introduced by a preposition.

These pronouns are called unstressed because the accent of the sentence never falls on them.
Direct object pronouns replace the direct object (who? what?).

These pronouns can either precede the verb or be merged with it. The differences in usage depends on the context.

Take a look at the following sentences

A direct object pronoun is merged with the verb if its mood is infinitive, gerund or participle.
Remember! Drop the final vowel of the verb before adding the pronoun.

Indirect object pronouns replace indirect objects (whom? to what? for what?).
They could be considered the equivalent of "to me", "to you", "to him", or any question that could be answered with a English preposition.

These pronouns always require a verb and they can either precede or be placed after it.

When the pronouns come after a verb, they are usually merged with the verb form itself if the verb is an infinite, gerund or participle.

Direct and indirect object pronouns may be used together in the same sentence or even in the same word.

If the direct object is placed towards the end of a sentence, it's usually referred back to with a pronoun in the sentence that follows.

Guarda quelle arance. Me le porti? (Will you bring me those oranges?)
Me = to me
Le = the oranges, direct object

Here are all the possible combinations:

Exercise on Italian stressed complement pronouns - Fill in the blanks

Exercise on Italian unstressed pronouns - Fill in the blanks