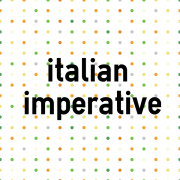 The modo imperativo (imperative mood) is one of the finite moods of the Italian grammar.

Definition and usage of the imperative

The imperativo is used with verbs expressing commands, orders, indications, advice and when a person tells another one what to do.
In its negative form the imperativo refers to a prohibition, thus meaning that something is forbidden.

This mood can only be found in main clauses.

It is the only mood which possesses only one tense: the present.

The imperative can only be found in the 2nd person singular (tu) and 2nd person plural (voi).

For all the other persons it is necessary to use the present tense of the subjunctive mood.

The first person singular (io) of this tense does not exist!

Conjugation of regular verbs in the imperativo

Regular verbs are conjugated as follows:

Verbs that belong to the -are conjugation

Verbs that belong to the -ere conjugation

Verbs that belong to the -ire conjugation

Conjugation of irregular verbs in the imperativo

Irregular verbs have to be studied by heart because they do not follow any grammatical rules.
Here you can find a table with the conjugation of the main irregular verbs in the imperativo:

The auxiliary verbs essere and avere form the imperativo in an irregular way. Therefore, their conjugation has to be studied by heart.

Formation of the negative imperative in Italian

The negative form of the imperative (imperativo negativo italiano) is formed quite easily:

1) For the second person singular (tu) it is necessary to add the negation non before the verb in the infinitive.

2) For all the other persons, it is necessary to add the negation non to the verb in the imperative or in the subjunctive.

Formation of the Italian formal imperative

In order to express a command or a request in a more polite way, it is possible to use certain sayings and expressions. These expressions are:

These expressions can be found either before or after the verb:

Remember that when the polite expression comes before the verb, the verb is used in the infinitive form.

Usage of the Italian imperative with pronouns

The position of the pronouns depends on a series of characteristics of the imperative verb:

Keep in mind that in this case the second person singular loses the final e of the infinitive form.
Example: Non mangiare (Don't eat)
Non mangiarlo (Don't eat it)

Now don't forget to check out our exercises on the Italian imperative tense to practise your knowledge!

Fill in the blanks with the correct form of the imperativo

Choose the correct form of the imperativo