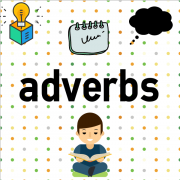 Adverbs (gli avverbi) generally add a piece of information about the main verb.

Adverbs are used to describe:

Adverbs of manner are used to express how an action is carried out.

Most adverbs of manner are formed by adding the suffix -mente to a qualifying adjective. -mente could roughly correspond to -ly.

Note that some spelling changes may occur and the final adverb form could vary.

Italian adverbs of Time and Frequency

These adverbs are invariable and add a temporal specification.

Adverbs of place pinpoint a location. They are all invariable.

Adverbs of quantity add information about an amount, a scale. They are invariable.

This category of adverbs is particularly useful to express an opinion.

With the following adverbs it's possible to express an uncertainty and ask questions.

An adverbial phrase is a construction of two or more words that act as an adverb.
These expressions are very common in everyday language.

Examples include: A piedi (on foot), A sinistra (on the left), Così e così (So and so)

Comparative and superlative constructions are used to make comparisons between two or more terms.

There are three kinds of comparatives.

There are also two kinds of superlatives.

Position of adverbs in a sentence

There are no fixed rules to define the position of adverbs.
Their spot in a sentence can change; an adverb can emphasise a specific part of the sentence according to the speaker's communicative intentions.

There is one substantial difference between adverbs and adjectives.

Take a look at the following examples: