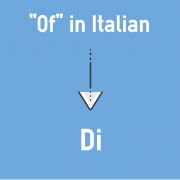 The preposition di (of) has a lot of uses in Italian

When di indicates possession, it translates as of or as the Saxon genitive.

When di indicates an origin, it translates as from or of.

When di specifies the contents of something, it translates as of.

When di indicates a topic, it usually translates as about.

When di indicates a material or an ingredient, it doesn't translate and it is not included in the English sentence.
In Italian the noun or the adjective indicating the material or the ingredient follows the preposition whereas in English it precedes the noun it refer to.

When di indicates a cause or reason, it translates as of.

When di indicates a measure or a quantity, it doesn't translate and it is not included in the sentence.
The noun and the adjective indicating the measure or the quantity precede the noun they refer to.


Part of a group

When di indicates a part of a group, it translates as of.


Time expressions (parts of the day)

When di indicates time expressions, it usually translates as in or during (+ the).

Be careful! Di notte → At night

When di is used in comparison forms, it usually translates as than, of or in.

In the following table you can find a list of typical Italian expressions that are introduced by the preposition "di".