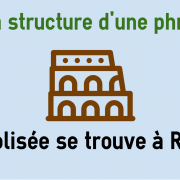 The sentence is delimited by the punctuation and constitutes at the same time a syntactic unit, a melodic unit and a unit of meaning. In the French language, verbal sentences (French: les phrases verbales) are the most common, they revolve around a conjugated verb.

You study a sentence according to its structure (simple, composed or complex), its type (declarative, interrogative, exclamatory or imperative), its form (affirmative or negative) and its voice (active or passive).

Just like in English, a sentence always start with a capital letter and always ends with a single point (.) but it can also end with an exclamation point or a question mark. The sentence is composed of a set of words placed in a logical order to have a meaning and to express a fact or an action.

A sentence can be more or less complex. Therefore, you distinguish simple sentences, composed sentences and complex sentences.

The verbal sentences (French: la phrase verbale) are composed of a subject or a group of subjects, a conjugated verb and a complement.

The nominal sentences (French: la phrase nominale) does not have a conjugated verb.

The complex sentences (French: les phrases complexes) are composed of several conjugated verbs. It consist of a main proposition and one ore more other subordinate clauses.

A complex sentence should at least have two verbs and therefore it can also have one, two or more complements depending on the numbers of verbs included.

The composed phrases in French

The composed phrases (French: les phrases composées) are similar to the complex sentence but use another independent proposition separated by a preposition or the comma (,).

​The phrases forms in French

The French grammar has many form of phrases (French: les formes de phrase) and among them you find:

The emphatic vs neutral form

You need to distinguish them.

The impersonal form (French: la forme impersonnelle) is when the subject of the sentence is the 3rd personal pronoun (il) and represents nothing and nobody. Therefore, you cannot replace the  personal pronoun with a word or group of words.

​The types of phrases in French

The French grammar has 4 types of phrases:

Within a sentence, the coherent set of words that alone makes sense is called a proposition (French: une proposition). The phrase can include one or more propositions which has a verb.

Each proposition consists of several group of words.

The French grammar has 4 types of propositions.

Multiple choice questions about the sentence structure in French