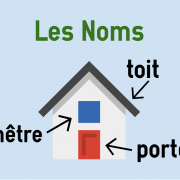 The noun (French: le nom) is a word that varies in gender and in number. In general, he is used along with a determinant that tells us about its gender and number.

It can be used as:

Any element of the French language can become a noun as long as you can add a determinant to it.

How to use nouns in French

A noun is a naming word which usually is used to describe living beings, things or ideas. All French nouns, unlike English nouns, either have a masculine or feminine gender.

About 60% of all French words are nouns which refer to:

The form of the noun varies depending on:

The gender (French: le genre) can be said to originate in the notion of sex at least for the nouns of people and animals. But for the largest number of names, the genre is unknown or sometimes comes from a particular origin that does not allow to establish a rule. The use of a dictionary is then indispensable in case of doubt.

The masculine is generally applied to the names of men and to male animals. As a general rule, a noun is masculine when the use allows the use of th articles "le" or "un"

The feminine is generally applied to the names of women and female animals. As a rule, a noun is feminine when the use allows the use of "la" or "une"

Normally, the feminine is formed by adding an -e to the masculine noun: un ami ----> une amie

Note that there are some exceptions:

If we are speaking about a single animal, object or person, the number of the name is singular.

The singular can be used to designate a group of individuals, objects or animals like in English.

If we are speaking about several animals, objects or people, the number of the name is plural.The plural uses these determinants:

The compound nouns (French: les noms composés) are nouns that are put together to form a meaning. they are sometimes separated by an hyphen. They can be:

The proper nouns (French: les noms propres) designates a person or object, or a single category of persons or objects. In general, unless otherwise, it has no determinant and starts with a capital letter.

The common nouns (French: les noms communs) are all persons or objects of the same species. He usually has a determinant and he starts with a lowercase letter

Nouns and nominal groups may have different functions in the sentence:

Multiple choice questions about the function of nouns

True or false exercise about the gender and number in French