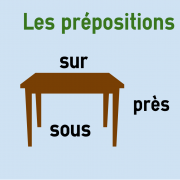 What is a preposition?

A preposition (French: les prépositions) is a word such as at, for, with, into or from, which is usually followed by a noun, pronoun or, in English, a word ending in -ing. Prepositions show how people and things relate to the rest of the sentence.

The French grammar has many prepositions along them you can find

Prepositions can create many kinds of connections or relationships between different parts of a sentence. They can indicate place, time. cause, goal, means, manner, possession, and so on.

In general they are used:

Please note that you can NEVER end a French sentence with a preposition.

She answers the question "quand ?" (when ?), to express when an action occurred, an event and to express several temporal values.

The local prepositions (French: les prépositions de lieu) are small words used to express a particular situation in space. It answers the question "où ?" (where ?), to express where an object, a person or an animal is.

These prepositions are used to describe the direction to a place, to orient yourself in a place or to establish a precise itinerary.

The prepositions of purpose

The prepositions of purpose (French: les prépositions de but) are small words that serves to express a particular goal, an intention. It answers the question "pourquoi ?" (why ?) an action is done.

The purpose can be expressed through the following structure:

The prepositions of manner

The prepositions of manner (French: les prépositions de manière) are small words that serves to express the way in which an action is performed. She answers the question "comment ?" (how ?).

The prepositions of cause

The prepositions of cause (French: les prépositions de cause) are small words that serves to express a cause, a particular reason. She answers the question "pourquoi ?" (why ?)

Fill in the blank exercise about the prepositions of cause