Cardinal numbers from 1 to 20

In the formation of the numbers in French is important to notice that complex numbers, which are formed of tens and units in spelling, are joined with a hyphen sign ( - ), ex. number 17 is written dix-sept.

Regarding French cardinal numbers from 1 - 100, the numbers from 20 to 69 follow the regular form which consists of the units from 1 to 9, for ex. number 62 is formed of the number 60 and 2, soixante-deux in French. Also is important to remember that the form with number 1 includes the conjunction et ('and') which is inserted between tens and units, ex.  31 = trente et un.

More complex structure have the numbers from 70 to 100. 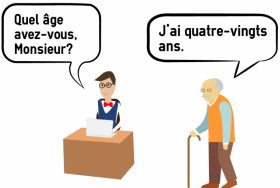 In French grammar, Hundreds and Twenties is added an -s if they are not followed by another Numeral Adjective, ex. number 480 is written 'quatre cent quatre-vingts', there is ending - s, but if the number is followed by another Numeral Adjective in that case 'vingt' (twenty) remains invariable, ex. 480 is written quatre cent quatre-vingt-deux.

The number 1 (un) remains invariable in writing when it's used alone, but an -e is added if the gender of the noun which follows the number is in feminine.

Thousands never add an -s in plural and they don't have an indefinite article, ex. 1000 = mille (un mille), also in French there is never conjunction et (and) between thousands and the hundreds/tens/units, ex. 1003 is mille trois (wrong: mille et trois). One more rule to remember is that Million takes an -s in plural and the same grammar rules are valid for large numbers such as billion and trillion.