Looking for a language tutor? Contact one of our teachers!

Theory and practice of Spanish pronunciation

Vocalization of Spanish letters might be confusing for an English speaker as they represent different sounds from their English equivalents. Let´s take a look on those letters that make a difference with regard to pronunciation.

The letter g before the vowels a, o, u, ue, ui has the English hard g sound, such as in the word "good". However, before e and i, g sounds as exaggerated English h.

The pronunciation of Spanish letter y is the same as of Spanish i. For instance:

Depending on the Spanish-speaking country or region this letter could be heard as [ʝ], [ʒ] or [ʃ]. Notwithstanding, the majority of Spanish speakers say it like the letter y. In other words, ll and y represent the same sound. It could be compared to the sounding of the English "yes". For instance:

The Spanish x sounds just like the English one. Exception to the rule are the names containing x. In this cases the letter would rather sound as English h.

In Spain it is pronounced like English th in the vocable "thanks" for example. In Latin America the same letter sounds like s. Some Z-words:

In Spanish v and b represent the same sound:

J is alike English h in "hi", but exaggerated. It is also the same as Spanish ge and gi:

It's like English oo in "roof", but shorter in the majority of the words. In the variants gui, gue and qu it is silent, unless it is marked this way:

Do you remember the pronunciation lesson number 1 from the alphabet lecture? Let us remind you the most important points:

How to stress the accent

Which are the common rules?

The Spanish acute accent called tilde (á,é,ó,í,ú) is very important in the language. It indicates that the normal rules of the word stress are being violated. Words with accent mark have to be learnt by memory. For example:

Some more words with "tilde" are:

Acute accents are also used to distinguish words written in the same way, but with divergent meanings. For instance: si (if) and sí (yes). 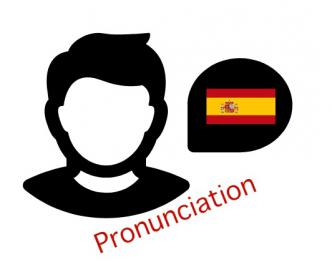 Now you can watch the video below or practice with the audio, microphone and exercises. Have fun!

Elena is an excellent teacher and a very nice person. I have been training in Spanish with Elena for quite some time now after her being recommended to me by a friend, and have consistently been very pleased with our lessons. While I do not consider myself to be very good at learning foreign languages, Elena is very patient and adapts the lessons to my ability, making me feel at ease. In fact, I find her to be extremely skilled at assessing exactly where I am at any given time with respect to my individual learning situation, and structuring the lessons accordingly. I think I probably would have given up trying to learn Spanish had I not began my study with Elena; and that would have been a shame considering where I am now with the language. Because of Elena's skilled help, I am extremely pleased to not only be conversant in basic Spanish, but also have confidence that I will one day reach full proficiency with the language. No other learning method I tried before meeting Elena compares to the one-on-one, personalized instruction I receive from her, which comprises reading; writing; developmental exercises; and most importantly, conversation. To be able to look at Spanish now and have it appear largely familiar is extremely satisfying. I even plan to study Italian with Elena after reaching my desired level in Spanish. These are not things I ever imagined would occur at the beginning stages of my studies. I am a native English speaker and find Elena's English to be excellent. She had no difficulty instructing me from the very beginning levels where it was necessary that a lot of English be spoken in our lessons, to where we are now with much less English being spoken. The friend who recommended Elena to me learned Dutch from her, and is equally pleased with their experience. I would not hesitate to learn from Elena any of the languages she teaches. I give Elena my highest recommendations and thank her for all the help she has provided me.

Thank you for your feedback, Brandon! I am very happy to know that you are so satisfied with the lessons. I've always believed that you could make it and I am glad that we never gave it up. The right attitude and a high level of perseverance have been the keys to your success. It has been a pleasure to be your guide in your learning process. I know that you can do much more, so let's continue towards a next level!

Hands down one of the best teachers I've had the pleasure of working with. Very knowledgeable in all aspects of Bulgarian (grammar rules, expressions, ...) but also in both English and French, which helps whenever you have a more in-depth question on the how or why something is the way it is in Bulgarian. Furthermore he has his own material and always comes prepared, but he is equally open to changing the subject of a lesson to suit your needs. He is patient, positive and not too scholarly, which is what you need as an adult learning day- to- day Bulgarian.I have been working with him for 18 months now and still look forward to our lessons every week.

An's Bulgarian has tremendously improved since she gave it go a year and a half ago. Of course, It goes without saying that I am pleased to work with such an enthusiastic learner who is living proof that, through hard work and perseverance, everyone can succeed in their language goals. An, you are now an independant user of the language who is able to successfully lead real-live conversations. Pat yourself on the back.

Again a lesson full of fun anf full of learning opportunities. I really like Angels patience and ability to adapt to my learning process.

This student is one of the best ones I ever had in my long teaching career. She is always so diligent and willing to learn more and more. I am so happy to work with her and see the immense progress she has made since we first started working together. Thank you Silke!

I would highly recommend Tove. Her lessons are fantastic and I learn exactly what I'm interested in. Tove is very friendly, our chemistry goes well together and I really enjoy being tought by her.

Dear Anita, Thank you very much for your nice review! I enjoy our lessons very much too and I am so happy that our communication and chemistry fit well together. That's the best precondition for a good learning experience. See you soon!

Fabrizio's children are learning French very fast, I have the impression that these lessons online have been helpful for them and I am sure they will master the language easily. They are very interested in learning.

Daniela is a very pleasant and brisk teacher who has the talent to make you feel at ease immediately. Her lessons are a nice mix of conversation and theory. Again and again it is a nice hour to look forward to !! Thank you Daniela !!

Dear Hilde, thank you very much for your words. I'm glad you are satisfied with our time together. I will continue to do my best to make you practice your beautiful Italian in a cheerful and peaceful way :-)

Carmen is really prepared and very very nice. She takes you by the hand and introduces you to portuguese language in a really pleasant way. I learned 3-4 sentences already on the first lesson!

Fabia is a very nice student and learns very quickly. It is a pleasure to teach her as she really likes to learn a difficult language like Portuguese and improved a lot.

It was very nice to take a lesson from Theano (Anny). She is adaptable to the student's level and is prepared to help the student as necessary. She is a friendly and caring teacher!

Σ' ευχαριστώ πολύ Μέγκαν! I'm glad you had a good experience and that you enjoyed it. Your excitment about learning greek motivates me even more :)

Marissa is a very professional teacher who can put the student at ease. It is precise, effective and oriented towards achieving the objectives: highly recommended.

Thanks so much Paola!!! I LOVE working with you guys and have enjoyed every moment. Even after this brief period, we can already start to see some changes. :-)

I have had many lessons with Luisa and I always look forward to them. We begin by chatting about the past week's events and them move to Espresso which I find very useful as a good review of material I have done in the past. There is often additional words used I had not met before. Luisa is always a pleasure to talk with and is a kind and pleasant teacher. She corrects me gently and offers useful words or meanings when appropriate.

Dear Martin thank you so much ! It's my pleasure taking class with you. And thanks a lot for your suggestion about Us movies ( Just Mercy) or Us books

A prepared and kind teacher, ready to teach with patience and good humor. He provided me with very useful materials to study and review even after the lesson. I recommend it to anyone who wants to learn a language with a smile. Thanks Silvia :)

Thank you so much for the Chiara review! It was a real pleasure to have this lesson with you. I wish you a nice trip with the German language!

The lesson with Celia was perfect! She was puntcual, kind and her teaching method is effective and funny. She started the class with some "games" to get to know eachother and then we discussed about an article she provided. The time of the class passed really fast and I learned new vocabulary. Absolutely raccomended.

Thank you so much, Remark! I´m happy to know you enjoyed our lesson and I´m looking forward to having more in the near future! Cheers!