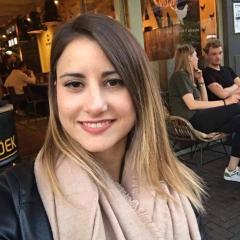 I have always been passionate about the Greek language, both ancient and modern. During my studies and early work experience, I realized that teaching Greek to non-native speakers would be the most fascinating challenge for me: I believe that language is the key to not only the culture of a country but also the hearts and minds of people. I’ve now been a Greek teacher for several years and I love it! In my classroom, in addition to syntax and grammar, we discuss the current situation in the Greek world, my and your experiences of Greece, the food, songs, movies and a lot more.
I am a native Greek speaker who moved to the Netherlands in 2017 to follow postgraduate studies in Linguistics. I have worked as a Greek teacher since 2016. I hold a Master in Language and Communication from Leiden University and a Bachelor in Greek Language and Literature from Aristotle University of Thessaloniki (2015). Additionally, I follows the program “Diadromes” (meaning “Routes”), which is the standard program of the Greek Ministry of Education for the training of teachers of Greek as a second/foreign language.
I use the book "Επικοινωνήστε ελληνικά" together with extra-curricular material provided by me.