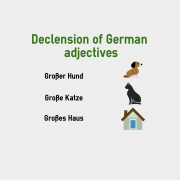 In German there are different types of adjectives. While one type needs to be declined in order to fit into the sentence, the other ones stay in their normal form. This chapter deals with the conjugation of German attributive adjectives.

In contrast to the attributive adjectives, the predicative adjectives follow the noun in a sentence and therefore don't need to be declined.

Because attributive adjectives come between the article of a noun and the noun itself, it is necessary to decline the adjective to adapt it to the noun.

Have a look at the chapter about different types of adjectives in German to get a better idea of their differences.

In order to determine the right form of declension you need to have a at these characteristics:

To find the right form of declension afterwards, you mainly should have a look at the article:

The weak declension of German adjectives

The weak declension is used, an definite article like der, die, das, die (plural) refers to the noun of a sentence. In this case, the article gives enough information about the number, gender and case of the noun.

Always keep in mind, that the article has to be declined as well. To learn more about it, have a look at the chapter about definite german articles.

In this case the declension is very easy, since the adjective can only have the endings '-e' or '-en'.

For more detailed information about the four german cases have a look at the special chapter about it.

The mixed declension of German adjectives

The mixed declension is used, if:

comes before the adjective and the noun of a sentence.

The strong declension of German adjectives

The strong declension is used when no definite or indefinite article comes before the noun. When and when not you use articles in German is explained in another chapter.

There are some exeptions to this rule. If a pronoun (e.g. dergleichen, dessen, wessen etc.) precedes the adjective you should also use the strong declension.

Spelling changes of adjectives in German

We might need to change the appearance and spelling of the adjective in order to wisely insert it into a sentence. The same thing might be necessary if prefixes and suffixes, or the different forms of comparative and superlative will be used. Then you always have to watch the right spelling of the words. 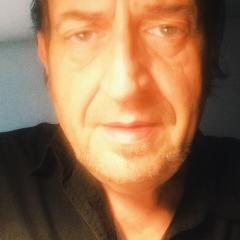